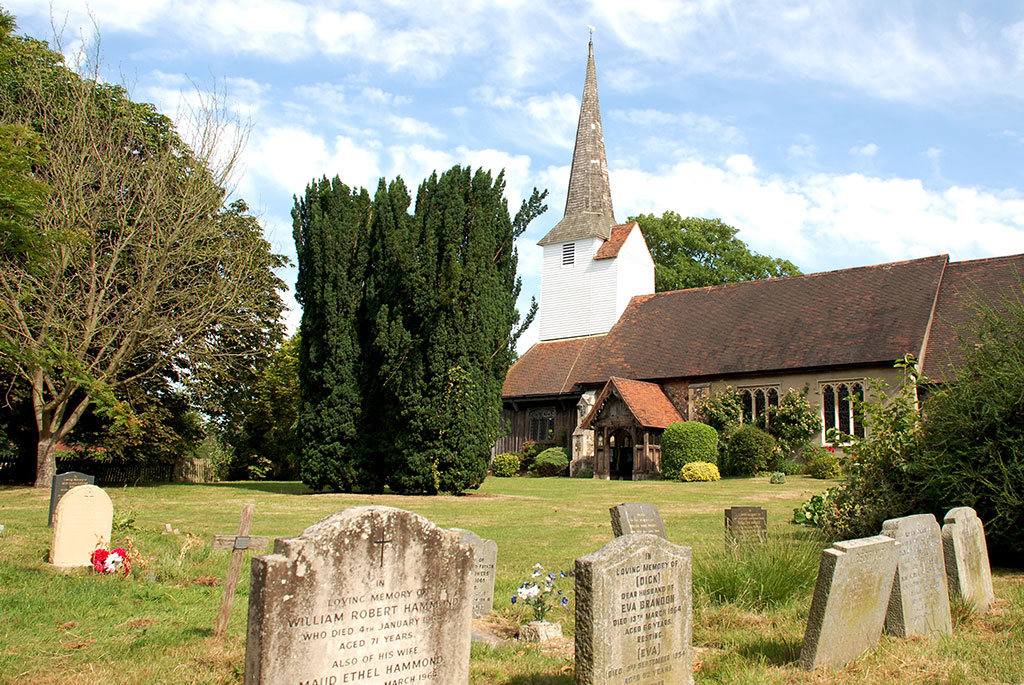 The first written evidence of a church on this site was in 1232. It is, therefore, not unreasonable to assume that a small Norman church was built here. The thickness of south wall at 3ft supports this theory. During restoration work in 1948 (of which more later) earlier foundation work was found that suggests the possibility of a Saxon church on this site – or at least, perhaps a little to the north. 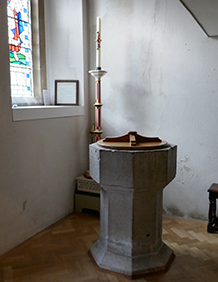 Let us return to hard and visual evidence. The Font which you will observe on your entry is dated about 1430. Clearly visible on the top are two marks showing where the original locks would have been to prevent the theft of Holy Water. 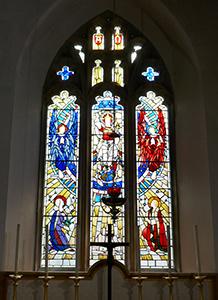 Stand for a moment at the back of the Church and admire the East Window. A view now uninterrupted by the former Rood, re-sited during Fr. Richard Buckingham’s incumbency (1987 - 2003). The window, depicting Christ in Glory, was designed and executed by Reginald Bell in 1948. 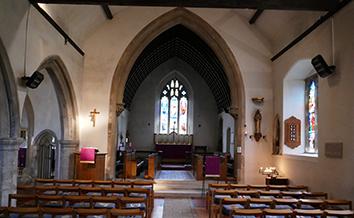 Walk, now, down the nave. We have already discovered that the wall on your right is three feet thick and the oldest part of the church dating back to Norman times. The windows are post war. In 1940 a land-mine fell just outside the church – the site marked by the Memorial Cross for King George VI – and caused extensive damage to the south side of the church, the nave roof, the stained glass and stone tracery and the belfry. See the historic image at stock.org.uk. 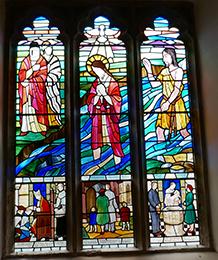 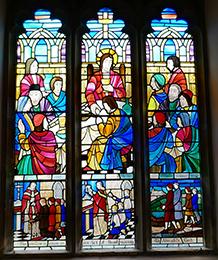 The windows in the South wall were designed by Farrer Bell in 1959. As you see, the upper portions show the Baptism of Our Lord – note the hallowed dove - and the Last Supper, the lower lights depict the modern equivalents of these events – baptism, confirmation and the Mass. The clergyman in these lower lights bears a striking resemblance to Fr Christopher Tatham, the parish priest of that day!

Notice on this wall the two plaques. The first, near the South door, a memorial to Admiral Sir Vernon Haggard and Lady Haggard both great benefactors of the church. Note that Lady Haggard was the daughter of Richard Adam Ellis. 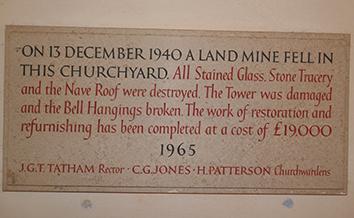 The second plaque records the completion of the first phase of the post-war restoration, following damage caused by a land mine that fell in the churchyard on 13 December 1940. £19,000 was a great deal to have spent and raised between 1940 and 1960. Indeed, much of the major works, due to war restrictions, could not be started until after 1945. So the time span was even less. Imagine, a church barely weatherproof, though still functioning. Fr. Christopher Tatham, at 57 years old, took up the challenge. He could never work out whether Faith was the greater influence on his decision than Folly, but with his determination and encouragement All Saints’ was rebuilt. 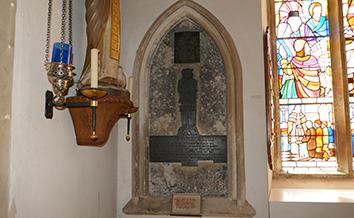 As we continue towards the front of the church we will notice the Twedy Brass. This brass to Sir Richard Twedy, founder of the almshouses, which are still inhabited, to the west of the church across the green , who died on January 28th 1574 was repositioned here in 1841. The brass is set in a black Marble slab which was formally an altar stone. Two of its consecration crosses are clearly visible. During the restoration work in 1948 the tomb was accidentally uncovered and remains – much decayed – discovered. The tomb was hastily re-sealed. 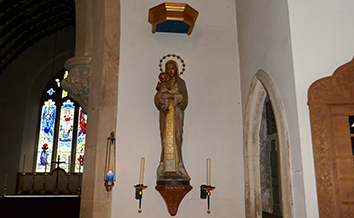 The Statue of Our Lady was a gift of the Mothers’ Union in 1957 and is Austrian carved wood. 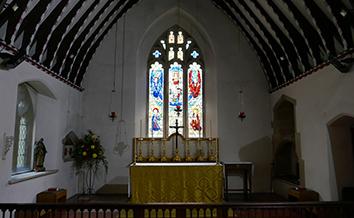 Walk up the three steps into the Chancel.  Two rectors are commemorated in the chancel. On the south wall a plaque commemorates E. P. Gibson (1877-1914), whose son was killed in action during WW1 and is commemorated on the village war memorial and, at your feet on the top chancel step, a brass plate commemorates Zephaniah Pierse(1678-1703). The Chancel walls can be dated to 1848 but are probably on older foundations. Note the Choir Pews designed by John Heywood as part of the 1981 re-ordering under the direction of Laurence King, O.B.E., F.S.A., F.R.I.B.A. Notice the List of Rectors dating back some eight hundred years. Reginald Bell, the designer of the East Window, also installed the south window in the chancel two years later, 1950. Admire again, at closer quarters, the East Window and notice the second of our hallowed doves.

The North Chapel is now our Sacrament Chapel, where the Blessed Sacrament is housed, and we request that our visitors respect this and return through the chancel. Walk past the Pulpit, a further piece of the John Heywood and Laurence King reordering of 1981. The North Chapel was built in 1904 to house the Bevington Organ, which still forms the basis of our existing organ. Please note the Epiphany Window – another donation of the Haggard family – with the second depiction of a horse in it. The Doorway Arch leading into the North Chapel dates from 1380 but was only rediscovered in 1903 when the work of building the Chapel was started. It was almost certainly the entrance to a stairway to the rood loft either outside the main building or passing through the immensely thick wall. Note the odd bulge in the wall above the doorway, suggestive of a stairway. Traces of the original colouring can just be detected reminding us that medieval churches were often highly decorated. Note the lights over the chapel arch which were originally in the outer wall.

Now turn around to view the North Aisle which was added in the 14th - 15th century and has a particularly fine King Post Roof, which can still be admired despite the unfortunate ceiling which is from an unknown date. Removing the pews in 1981 opened up the aisle and we can get a better vision of its 15 century glory. The three Memorial Tablets were given by Mr. Richard Adam Ellis, of Greenwoods in memory of his wife and their two sons. It is sad to note that both sons died whilst serving King and Country. The eldest son, Richard Hugh Adam, aged only 22 in India and the second, Rae Adam, in France only weeks before the Armistice in 1918.  Photographic evidence shows these memorials differently sited and they were grouped, with family permission, as we see them now, as part of the post second world war restoration. Opposite the Ellis memorials note the brass eagle Lectern which dates from 1897. 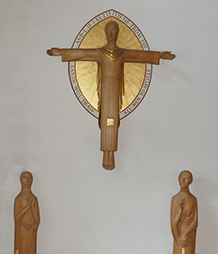 On the north wall at the west end of the North Aisle are the Rood Figures. Before 1986 this area housed the Sacristry and was cleared with the building of the new Vestries on the North side of the church. The Rood Figures of Our Lord, Our Lady and St. John were designed in 1955 by Gwynneth Holt and are carved in lime wood. As part of the post war restoration these figures were originally position in the Chancel Arch on a Rood Beam. The figures were incorporated in a hanging rood, still in the Chancel Arch, as part of the 1981 re-ordering but were moved to their present position in about 1990 to open up the view of the East Window, which we have already admired. Pictures of the church before 1940 – the land mine year – show no rood in its traditional position. Note by the organ stairs the wrought iron candle holder given to All Saints’ by the Roman Catholic congregation in Stock in thanks for the use of this building in 1973 during restoration of their own church. 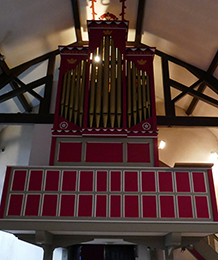 The origin of the Bevington Organ is unknown but was presumably placed in the North Chapel in 1904. Parts of it were into the new organ of 1948 when a second manual and an electric blower were installed and the whole being placed in present newly constructed gallery. The gallery was re-painted under the direction of Kenneth Campbell in 1981. There had been a previous gallery and in 1860 it was noted that in this gallery there was a barrel organ possessing three barrels with twelve tunes on each barrel. That gallery was removed in 1888.

It is a regret that the Belfry has to be locked but if you have the opportunity please visit the Belfry. The Belfry added in 15th century is an extremely fine example of an Essex timber tower. Note particularly the superb carved tracery work in the lights over the west door, which are more advantageously viewed from outside. The tower is a free standing structure completely separate from the church. It is built without foundations, standing on its own weight. There are three bells – dated 1577, 1799 and 1847. Since the 1940 damage the structure is not secure enough to ‘ring up’ and they can only be chimed. 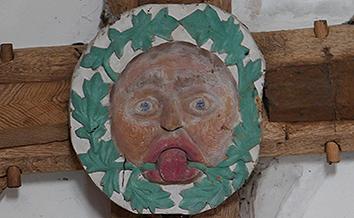 Look up to the centre of the immense timbers and note also the central boss - the ‘Green Man’. In the south-east corner of the Belfry is a clock dating from about 1725. There is no face. The clock was found after long dis-use and reconditioned in 1948 striking the hour only on the tenor bell. The electric winding mechanism was installed in 1965.

Before leaving the church please spend some time admiring the Kneelers. These were presented and worked by ladies and gentlemen both resident in the parish and also from outside but connected to the church. 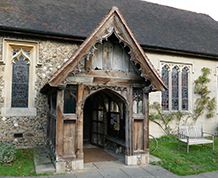 As you leave through the 15th century porch, which has been much restored over the years, please notice the plaque, to your left, commemorating the restoration of the porch in 1937 due to Mr. R. Adam Ellis’s generosity. In the early 1900’s Mr Ellis bought and extensively enlarged Greenwoods - now the hotel/spa at the north end of the village. He and his family were great benefactors of the church. To the right of the door as you leave is the Holy Water Stoup – also 15th century, though vandalised during the Commonwealth – a sad period for church architecture, with the vandalising of so many church fittings, quite irrespective of their artistic beauty and architectural importance. We can only speculate how local craftsmen might have decorated and adorned All Saints’ interior.

Outside the church to the south to your left as you leave, the Stone Cross, situated in the Garden of Remembrance used for the burial of the ashes of the departed, marks the exact spot where the land-mine fell in 1940, devastating the upper graveyard. The cross is dedicated to the memory of King George VI and is said to be unique in this dedication.

Proceed around the west end of the church and now note particularly the superbly delicate tracery over the west door. On the west end of the North aisle notice the grotesque figure dated about 1350 and look up at the dragon shaped weather-vane which was added to the spire in 1760. The Vestries, described by Dr. James Bettley, in his 2007 editing of Pevsner’s County History, as exemplary, on the north side of the church, although not completed until 1986, was conceived by Fr. Jeremy Bunting, rector from 1968 to 1987.

These notes are an extract (edited with updates) from Fr. Jeremy Bunting’s 1983 “A Short History of Stock Harvard and Guide to All Saints’ Church”